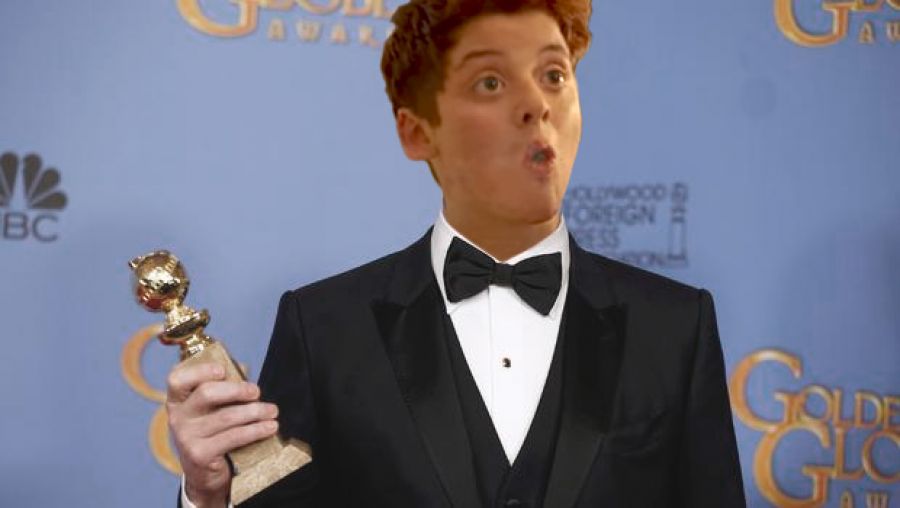 In a remarkable upset, the Geico Peter Pan commercial swept almost all the major awards at the Golden Globes, including "Best Picture". Thomas Barbusca, took "Best Actor", for his starring role as Peter Pan.  Alan Brooks and Betsy Baker took "Best Supporting Actor and Actress" for their respective roles as Phil and Jo Ann.  Only Brie Larson was able to break Peter Pan's stranglehold on the awards by winning "Best Actress" for Room. Geico's Peter Pan also won, "Best Director, Best Adaptation of a Screenplay, Best Song, and Best Cinematography."

Charles Portnoy, of the  Hollywood Foreign Press Association said, "Normally such a short film wouldn't be considered for all these major awards, but I think the voters are just sick and tired of voting for the likes of Matt Damon and Leonardo DiCaprio for insipid acting performances in overrated bombs. This film (Peter Pan) both entertained and alternatively annoyed so many people, we felt it deserved the recognition for its ability to move people. And of course the acting was so vastly superior to anything we see from Hollywood, I think voters felt compelled to honor it."

Hollywood a-listers didn't seem to share the HFPA's enthusiasm for the film — Leonardo DiCaprio, who was up for "Best Actor" for his performance in The Revenant lashed out, "This little (expletive) does a 30 second spot and wins for that (expletive)! I wrestled a bear for (expletive) sake, I sat out in the (expletive) cold for goddamn weeks...this is utter (expletive)." The viewing public seemed to agree with the HFPA for the most part. Suzie Cremchez, who waited outside hoping to see some of the stars said, "I laugh every time the Peter Pan commercial comes on, I can't help it, but when I went to see The Revenant, I feel asleep...seriously...what was the point of that movie?"