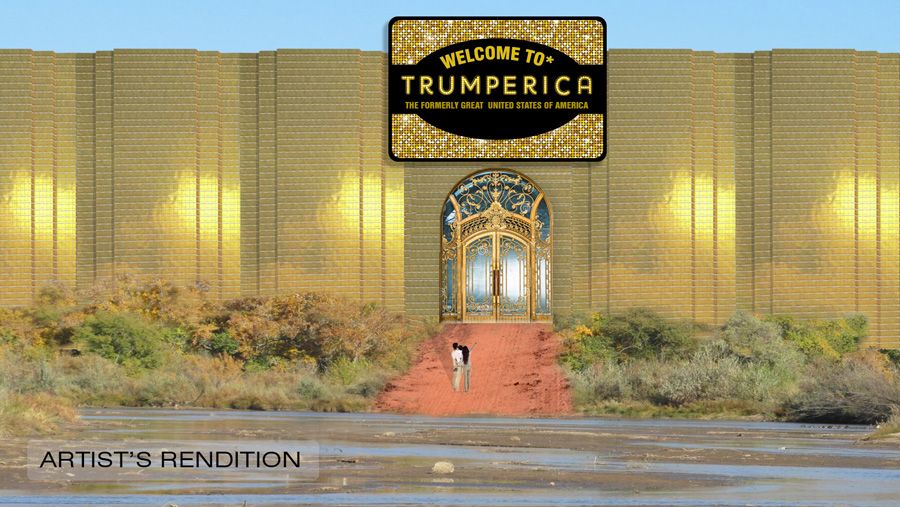 In a press conference today, Donald Trump unveiled the design for the wall he plans to build on the Mexican border. He announced, "This will be the greatest wall in the history of the universe. This wall will let the world know that we will not be kicked around any more. I will make America great again. If you elect me, I will build this wall and keep you safe from rapists, drug addicts, murderers and terrorists."

The proposed wall would be 50 feet high and almost 2,000 miles long. Independent engineers estimate that wall's construction costs would be $200 trillion, almost 3 times the world's GDP, and take over 300 years to complete. When confronted with these figures, Trump responded, "That's if these other politicians built it — they're idiots. I would use great management. Terrific management. Have you seen my buildings? I could build this wall in my sleep. In one night, and still wake up full of energy. You need a guy with energy. That Jeb has no energy. Looooow energy that Jeb. And cost is no object, as I'm going to make Mexico pay for it. I'm a great negotiator. What am I saying? I'm the greatest negotiator God ever created."

The following specifications for the wall were provided by the Trump design team:

* Entrances will primarily used as exits for deporting illegal immigrants. Deported immigrants will be able to use it as an entrance once they've learned English, gotten their Phd and have acquired a work visa (which have been banned till such a time as we've gotten world terrorism under control.)