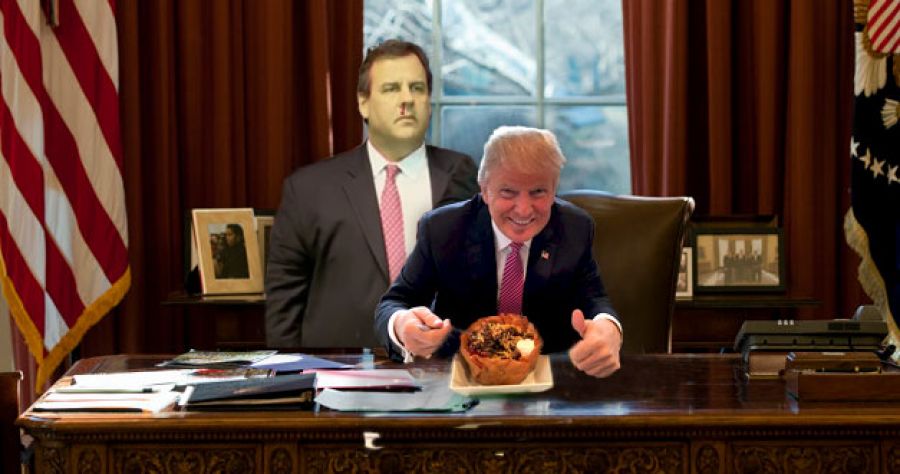 President-elect Trump has selected Governor Chris Christie to head the new “Food Security Department.” Christie’s responsibilities will entail trying all President Trump’s food before it is given to the president.

President-elect Trump said, “Chris is a great man. He is uniquely qualified for this position...he’s fiercely loyal, has an insatiable appetite, and he’s expendable.”

Inside sources have said the transition team member, Jared Kushner, was originally blocking any post for Christie, but finally relented, saying, “Fine...if that fat idiot wants to be a canary in the coal mine, let him, I can’t stand him sulking around here any more.” This latest appointment comes as a surprise, as most experts believed that Christie wasn't racist enough to serve in Trump's cabinet.

The secret service recommended this new position because of Trump’s penchant for fast food. Normally the president’s food is prepared in secure conditions under the supervision of the White House chef, but President-elect Trump primarily eats only Taco Bell™ and McDonald’s™ Happy Meals®. Food security was further compromised when White House chef Pierre LaGross unexpectedly tendered his resignation, saying, “I refuse to cook for a man that will not eat vegetables, and has to have the crust removed from his bread.”

More in this category: « Cleveland to Set the Cuyahoga River on Fire for GOP Convention Trump to Replace Period with Exclamation Point by Executive Order »
back to top