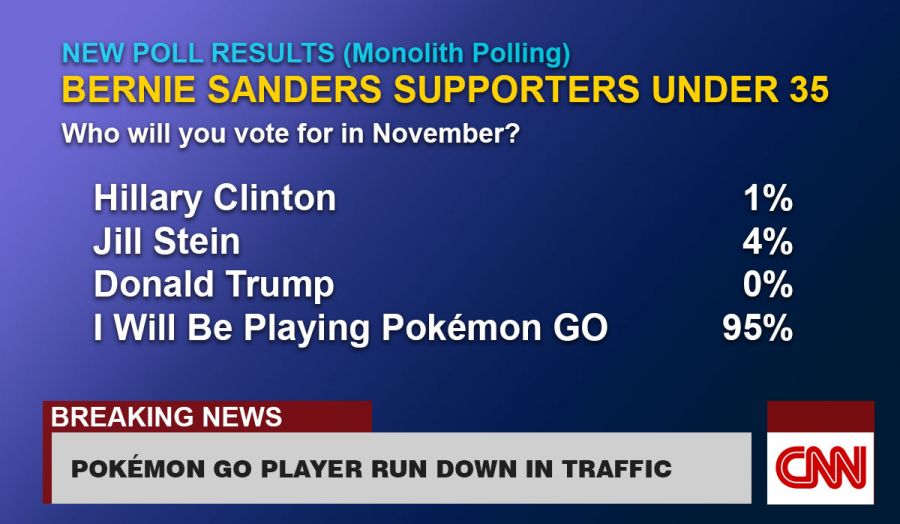 New York - A new poll from Monolith Polling suggests that despite Sanders’ endorsement of Clinton, Sanders’ supporters have moved on to the “next big thing”, and she will get very little help from them in November.

Only 1% of those 35 or younger, identifying themselves as “Sanders’ supporters”, said they would vote for Clinton in November. 95% of them said they would not vote at all and would instead be playing Pokémon GO.

Cassidy Lemming 22, a former Sanders’ supporter, said, “It was fun supporting Bernie while it lasted, all my friends were into it, but politics is pretty boring overall, and frankly I don’t even understand the rules. I’m really into Pokémon GO now, and it’s so much fun, and I get so much exercise — look how toned my bum is.”

Atticus Lackey 24, another former Sanders’ supporter that we talked to, said, “Ohh my God, is that a Weedle?” and then ran into traffic.

The Clinton campaign was in talks briefly with Nintendo, the makers of Pokémon GO, about placing Pokémon creatures at polling stations on voting day, but the campaign decided the estimated votes wouldn’t justify the expense. Campaign director, Simon Maling said, “We finally realized, short of putting on a singing competition, there is just no way to get young people to vote. Hell — if they actually voted, Sanders would be the nominee.”