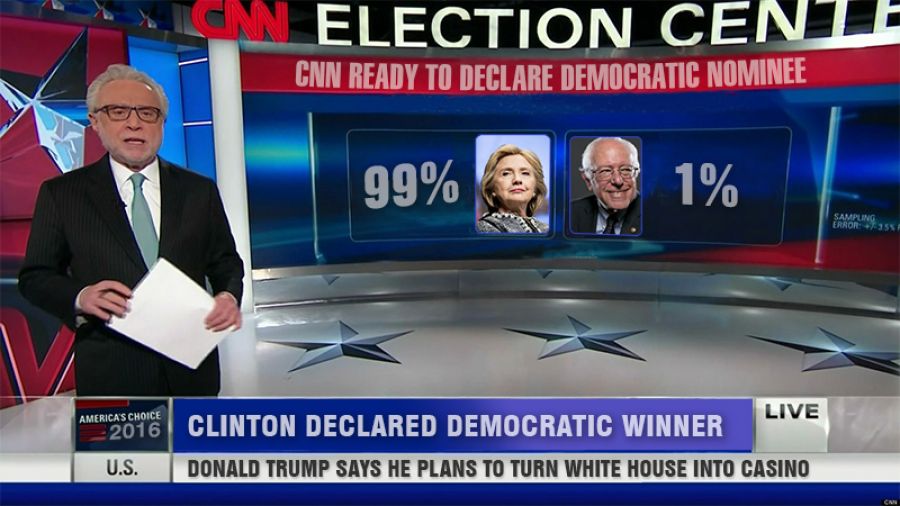 In what would seem early even in the crazy world of cable news, CNN announced today that they have called the Democratic primary race for Hillary Clinton. This is somewhat surprising since the Democratic convention is still over six months away and not a single vote has been cast.

In off-air comments, anchor Wolf Blitzer said, “In this dog eat dog news world, you have to be bold to beat the competition, and let’s face it — we’ve had Clinton as the de facto winner for over three years now; we’d look pretty silly if she wasn’t declared the winner. I wanted to call it after Biden dropped out.”

A CNN editorial insider, who wished to remain anonymous told us, “In truth, Sanders still has a great chance to win the nomination. He’s doing well in Iowa and New Hampshire, and a win in either or both of those states could give him the momentum he needs to ride all the way, and he beats every Republican in the polls with a higher margin than Hillary. We hope our announcement will discourage people to get out and vote — having an old Jewish guy in the White House who’s honest, treats everyone with respect, and works tirelessly for the people would be great for America, but good God, it would destroy our ratings.”

When asked about the CNN announcement, Sander’s campaign staffer Rashad Williams responded, “Well it’s good news and bad news. The good news is that this is the first on-air mention we’ve had in 3 weeks. The bad news is that this may discourage people to come out and vote. In truth however, most of Bernie’s supporters are young people, and I don’t think they’d watch CNN on a dare.”

More in this category: « Trump Promises Luxury Penthouses to All Whites If Elected Ben Carson's Dog Releases Book »
back to top