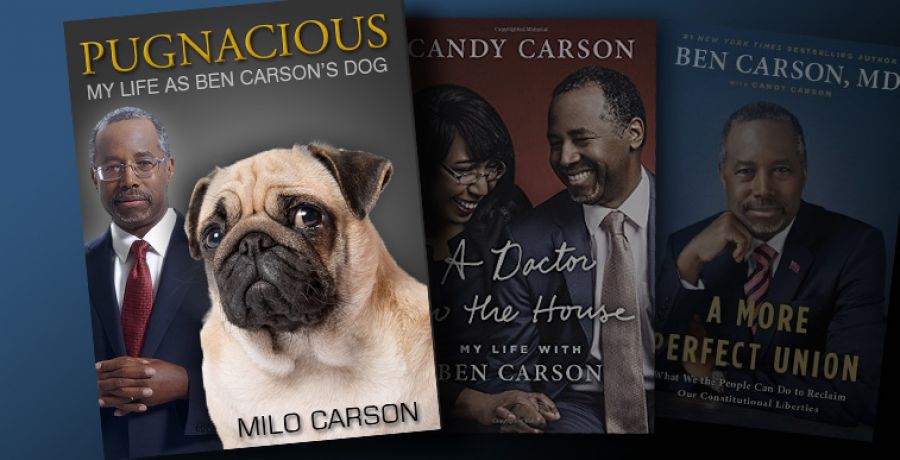 In what seems more like an extended book tour than a Presidential campaign, and on the heels of the release of his wife, Candy Carson's book, the Carson's pet dog Milo today released a book of his own. Carson has already sold hundreds of thousands of books on his campaign and was shilling Milo's on the campaign trail in Iowa today.

The book, Pugnacious, details the story of the dog's life, starting as an angry and unruly young puppy coming of age under the sage tutelage of owner and master, Ben Carson. Milo's exploits as a young pup are chronicled in sometimes shocking detail, with stories of defecating on family rugs and tearing furniture to shreds. Later, under the watchful eye of a kind and Christian Ben Carson, Milo becomes a model citizen and cherished family pet.

Like Mr. Carson's own books, the veracity of Milo's is already being called into question. After an incident which occurred during Milo's appearance on MSNBC show, Morning Joe, some are suggesting Milo's reformation may not be as complete as the book has implied. During the show, the set was suddenly befouled by a pungent odor, which Mika originally blamed on Mike Barnicle (after making her trademark frowny face) — later it was discovered that Milo had left a "present" on the guest chair. Mr. Carson subsequently claimed that this was simply a one time incident and only happened because the dog is made nervous by "main-stream" media.